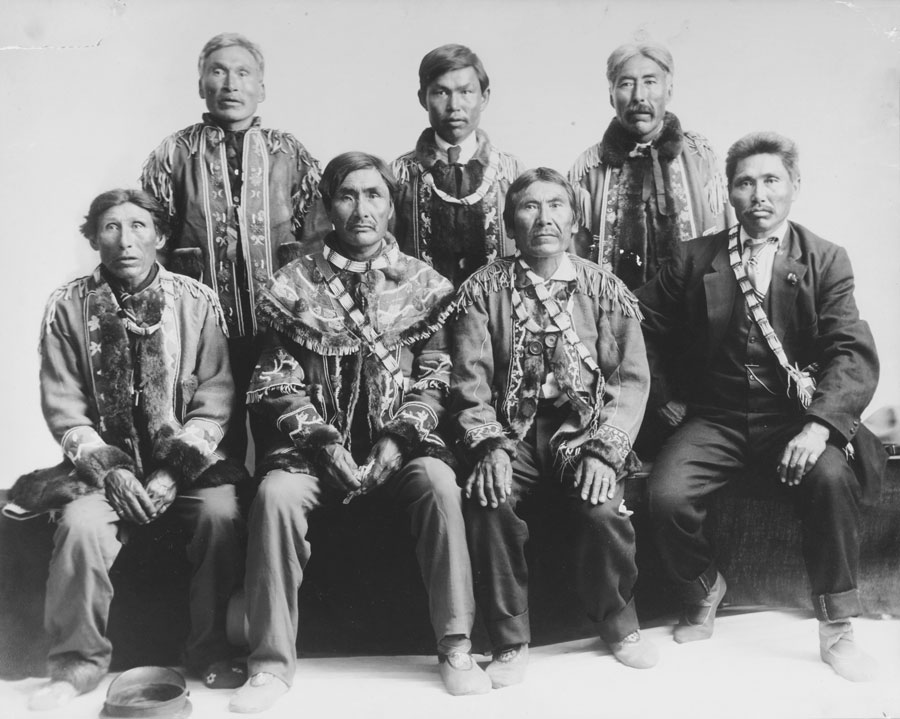 At the turn of the twentieth century there were increasing numbers of non-Native people coming through the traditional territories of the Athabascan people, and in 1914 President Woodrow Wilson authorized the construction of the Alaska Railroad. This was when the Athabascan Chiefs within the region began the early effort to protect our lands and resources. Tired of outsiders encroaching on our traditional homelands, the Chiefs organized a meeting to denounce the construction of the Alaska Railroad and to protect traditional burial grounds in Nenana.

In the summer of 1915, the Athabascan Chiefs from the lower Tanana River met with Judge James Wickersham, Alaska’s delegate to Congress, at a historic meeting of Native leaders in Fairbanks. This meeting marked the start of a formal relationship with Athabascan Tribes and the United States government. During the meeting, the Chief’s clearly expressed their priorities to sustain our villages through employment, education, health care, and land protection; the land protection was specifically for traditional subsistence hunting and fishing and for access management.

During the Congressional debate on Statehood for Alaska, members of Congress were concerned about the financial viability of the proposed state. This is because the conventional means of taxing individuals and businesses was expected to be inadequate based on the size of Alaska and the small and widely dispersed population. The Alaska Statehood Act was passed in July 1958, and the new state government was thus granted 103.5 million acres of land by the federal government as a source of financing for state government.

Across Alaska, Indigenous Athabascan, Inupiaq, Yup’ik, Cup’ik, Unangax, Sugpiaq, Eyak, Haida, Tsimshian, and Tlingit continued living our traditional lifestyles, even throughout the forty year-push for Statehood. Through these complex policy discussions, Alaska Natives were acknowledged but ignored. For example, the aboriginal claim to our traditional territories, established by continuous and exclusive use and occupancy of tribal lands was acknowledged in Section 4 of the Alaska Statehood Act. Yet the newly formed government began the process of land selection with disregard for traditional Native land ownership. This set up the Alaska Native fight for recognized land ownership, and the subsequent negotiated settlement for aboriginal land claims in Alaska.

Driven to act on behalf of his people, Al Ketzler, Sr. of Nenana helped to organize a meeting of 32 villages in Tanana during 1962. Flying to Washington D.C. with a petition signed by 24 villages in hand, Ketzler, Sr. organized a statewide coalition of Alaska Native leaders that would eventually become known as the Tanana Chiefs Conference. This led to the Secretary of the Interior freezing state land selections in 1966 until the issue of Native land claims was settled.

The Alaska Federation of Natives (AFN) was formed in 1966. The Tanana Chiefs Conference representatives and over 400 Alaska Native people from 17 Native organizations gathered in Anchorage for a 3-day conference to address Alaska Native aboriginal land rights. AFN became a unified voice for all Alaska Natives in the fight for land claims.

In 1968, United States Senator Ernest Greening held hearings by the Senate Interior and Insular Affairs Committee on land claims and traditional leaders, including Chief Peter John of Minto and Chief Andrew Isaac of Tanacross provided powerful testimony. Tanacross filed their first land claim in 1963, and Chief Andrew Isaac testified, “We made our claim in 1963 because the state came in and selected our land – everything, even our village and graveyard.”

The initial meeting of the Tanana Chiefs was monumental for Alaska Native advocacy and established the pathway to one of the largest land claims settlements in United States history.

ANCSA: The Largest Land Claims Settlement of the Age 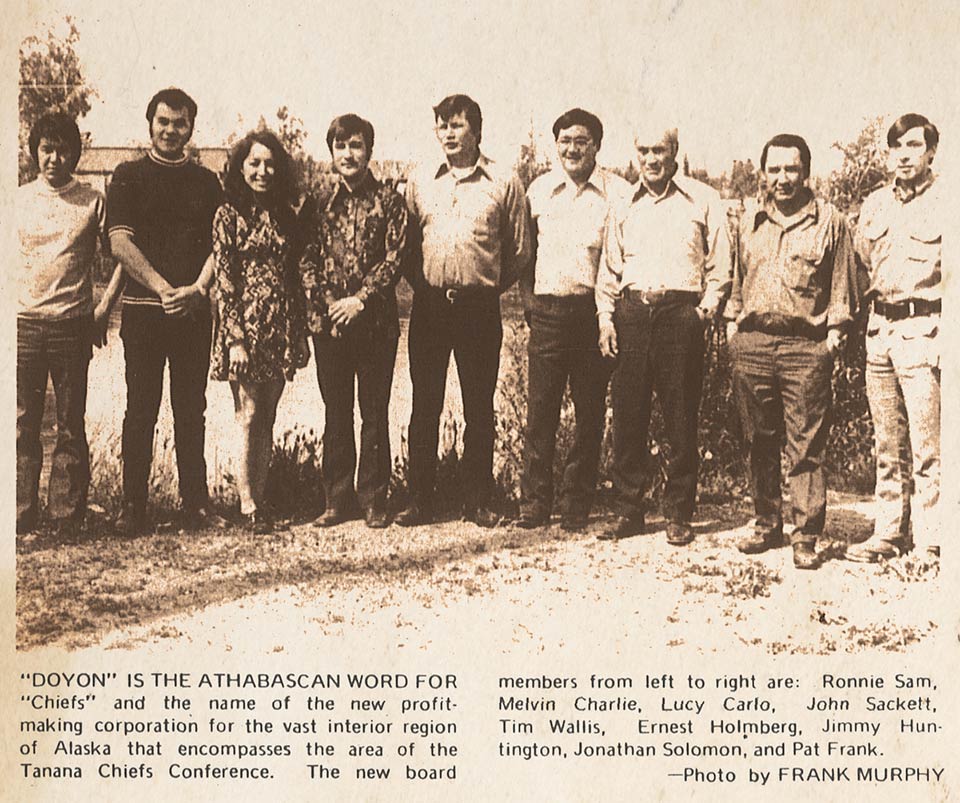 The discovery of commercial quantities of oil on the North Slope elevated the land claims debate in the late 60s, as the prospect of oil exploration and development was put on hold due to Alaska Native land freezes throughout the state. Coming from the state and oil industry, in addition to the Alaska Native people, the pressure for Congress to reach a land claims settlement was at an all-time high.

After years of debate, compromise, and frequent travels to and from D.C by Alaska Native leaders, President Richard Nixon signed into law the Alaska Native Claims Settlement Act (ANCSA) on December 18, 1971. This extinguished aboriginal land titles in Alaska and awarded 44 million acres of land and $962.5 million to more than 200 villages and 13 regional corporations.

ANCSA was a system that redefined federal Indian policy and mandated that both regional and village corporations be owned and enrolled by Alaska Native shareholders ─ placing corporate ownership into the hands of Alaska Natives.

Doyon was incorporated in 1972 and composed of the original Tanana Chiefs who began the unprecedented task of selecting 12 million acres of land for their people.

Through ANCSA, 12.5 million acres of land and $54.4 million dollars were allocated to Doyon, Limited.

The first meeting of the Doyon, Limited Board of Directors was called to order by the President and Chairman of the Board John Sackett on June 26, 1972. Present were John Sackett, Tim Wallis, Jimmy Huntington, Jonathon Solomon, Patrick Frank, Ernest Holmberg, Ronald Sam, Melvin Charlie, Lucy Carlo, Sam Kito, and Richard Frank.

While holding the largest amount of land out of all of the regional Alaska Native Corporations, Doyon, Limited’s boundaries incorporate features that are unique to the region. Doyon leadership took on the monumental task of analyzing what lands would be exemplary for future resource development, what lands would be protected as sacred and historic sites and would map out subsistence areas for land selections.

In addition to 37 villages and 26 village corporations, Doyon also has within its boundaries the tallest mountain in North America, four military bases, the longest rivers in the state, the second largest city (Fairbanks), and the largest number of highways. The Doyon region also has as a boundary the Canadian boarder, and also borders seven other Alaska Native regional corporations.

The late John Sackett was born June 3, 1944 at spring camp, up the Huslia River, a tributary of the Koyukuk River. When he was six, he attended St. Mark’s mission in Nenana for a year. Later he went to Sheldon Jackson High School in Sitka and graduated in 1963.

His first college year was at Ohio University. He graduated from the University of Alaska Fairbanks in 1972 with a major in Business Administration (Accounting) and a minor in Political Science.

In the mid-1960s he became involved with the Fairbanks Native Association and the Tanana Chiefs Conference. In 1966 when he was 21, he ran for the Alaska State House of Representatives. He is the youngest member ever elected to the Alaska State Legislature. He began an 18-year career in the House and Senate on all the Finance Committee and as a member of the Majority.

For ten years, he served as the chairman and co-chair of the Finance Committees. He was one of the most powerful members of the legislature. He accomplished much for his constituents and the entire state through the formation of infrastructure and social programs and he endowed the educational, social, and economic development of rural Alaska.

Senator Sackett also served as a president of Tanana Chiefs and in 1972 was the founding president and chairman of Doyon, Limited.

Morris Thompson, Koyukon Athabascan, was born and raised in Tanana, his Native home in Interior Alaska. The son of Warren Thompson from Indiana and Alice (Grant) Thompson from Tanana, he dedicated his life to Alaska issues and its peoples.

Morris was one of Alaska‘s prominent business leaders. He was the youngest commissioner of the Bureau of Indian Affairs, held leadership positions in the Alaska Federation of Natives and Commonwealth North, as well as a cabinet position in the Hickel administration. In 1985, he took over the helm of Doyon, Limited, leading that corporation to become one of the most profitable and stable Alaska Native Corporations.

Morris moved the world, from village to Washington, D.C. But he never forgot where he came from. He always referred to himself as “just another boy from Tanana.” He used his wit, values and wisdom to heal, unite and lead. His lifelong commitment to bringing all Alaskans together in progress and prosperity made him a true bridge between cultures.

Frank became involved in community projects at a very young age and joined the workforce at age 13. At age 18, Frank enlisted in the Army Air Corps and served in the Pacific theatre during World War II.

After serving for the Army Air Corps, Frank was hired as an aircraft mechanic for Wien and Boeing on the North Slope of Alaska. He also worked on the Tanana and Yukon River “steamboats” carrying freight to rural areas of Alaska.

Later, he met his wife, Dr. Rev. Anna Frank. Together they had two daughters, Roxanne and Robin, and two sons, Parker and Darrell.

Frank was a distinct advocate for Alaska Native rights and land claims, serving as Chief of the Minto Tribal Council, President of the Minto Village Corporation, and a Board Member of Tanana Chiefs Conference. In 2001, he was appointed by Governor Tony Knowles to the Alaska Veterans Advisory Council.

Frank was recognized in the September 12, 2012 edition of the Congressional Record, an article stating that Frank’s “leadership, recognized throughout the state is one of the reasons that the Native people of Alaska won their battle for land claims with the passage of the Alaska Native Claims Settlement Act of 1971,” ensuring that his life and work will remain a permanent part of America’s history.

Lucy Carlo, the daughter of William and Poldine Demoski Carlo, was born in Ruby. Her family later moved to Galena and then to Fairbanks. She went to school in Fairbanks until the eighth grade, and then attended Copper Valley Catholic School for the next four years.

Carlo graduated from the University of Alaska Fairbanks with a bachelor’s degree in business, and worked for many Alaska Native organizations, including Fairbanks Native Association and Tanana Chiefs Conference. She served on the Doyon, Limited board from 1972 to 1978. She was employed by Alaska Housing Finance Corporation, where she worked for 17 years.

Lucy Ann Carlo was one of the founding board members of Doyon, Limited and was a tireless advocate for human rights, Alaska Native rights and women’s rights.

Chief Peter John was born in 1900 in Rampart, along the Yukon River, and raised in Minto. His mother, Annie, passed when he was two-years old; he lived with his father, John, until he was an adult.

After attending Saint Mark’s Mission in Nenana and completing the second grade, Chief John returned home to Minto and taught himself the English language from dictionaries, magazines, and the Bible. He learned many of his traditional skills by watching others. This led to his ability to construct his first dog sled, canoe, and snowshoes.

At age 25, Chief John married Else Albert at Saint Mark’s Mission; together they had four children, nine grandchildren, and many great grandchildren.

Chief John believed that it is symbiotic to the Athabascan culture that they need each other to survive in their traditional ways. For this reason, he only spoke in his Native language at home and was a pioneer in the documentation of the Minto Native language dictionary.

Chief Andrew Isaac was born on April 16, 1898 in a camp shelter between Joseph Village and Kechemstuk. Surrounded by Chiefs much of his life, Chief Isaac grew up learning the Athabascan lifestyle; living an honest and hard-working life.

In 1972, Chief Isaac was appointed First Traditional Chief of the Athabascan people by Tanana Chiefs Conference. In 1979, he was awarded an honorary doctorate of the humanities by the University of Alaska Fairbanks. Chief Isaac was also awarded the Indian Health Service clinic in Fairbanks to be named after him. Additionally, Doyon, Limited honors shareholders a leadership award named after Chief Isaac.

Chief Andrew Isaac and his wife, Maggie, had four children. Together they lived in Dot Lake until his passing in 1991, at the age of 93.