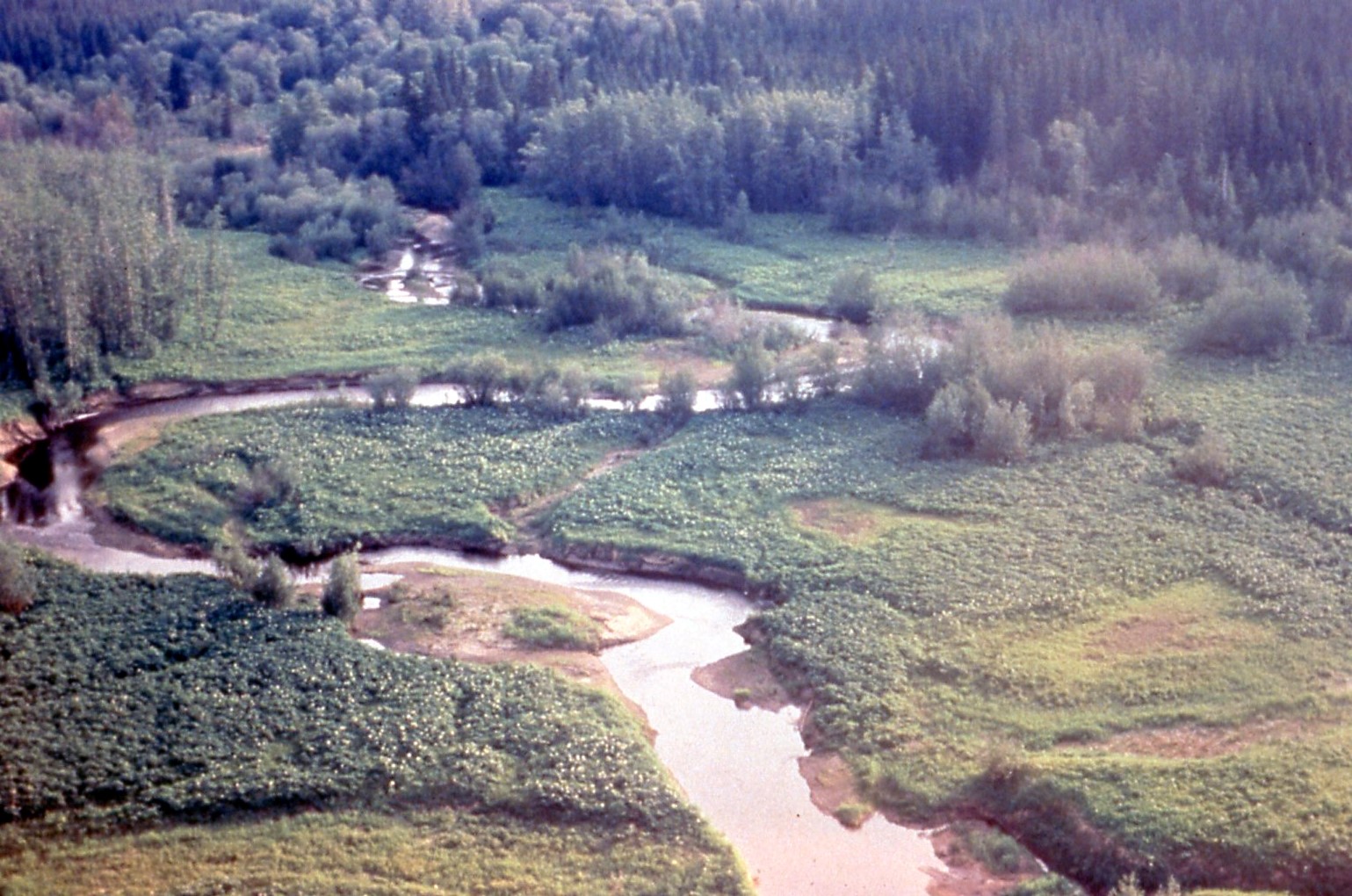 Doyon’s 50-year anniversary is June 26, 2022. As part of this celebration, Doyon will be sharing stories, highlights, and photos from past annual reports, newsletters, village corporations, shareholders, and leaders. To highlight your village or shareholders, contact Doyon Communications Department at communications@doyon.com.

On March 14, at 9:00 a.m. the Tanana Chiefs Conference, representing some thirty-nine Native Communities, assembled at the Eagles Hall in Fairbanks for a three day session.

Behind their leaders’ table, an unlighted Bingo number board and an American flag seemed a suitable backdrop for the complex game of land selection.

The attentive and serious participants wended their way through lengthy explanations of land claim legalities, enrollment procedures, and technicalities for the incorporation of the Regional Corporation required under the Native Claims Act.

It was a numbers game all the way: how many acres of land are available for selection, how many weeks or months to make final selections, how many people to be counted in enrollment, how many dollars to pay executives and leaders, how many outside attorneys and consultants to hire, and how many incorporators to elect?

In the President’s report to the delegates, Tim Wallis provided some of the background leading up to the decisions that would have to be made.

A critical factor facing the Executive Committee was the pressure of time. Near the end of January, the Tanana Chiefs had only three weeks to set up a Land Office, to research, and to come up with “in lieu” land selections.

The entire committee flew to Anchorage to meet with Assistant Secretary of the Interior, Harrison Loesch.

Loesch stated firmly that he “was here to discuss the land withdrawals but only the enment and funding.

He was urged by the committee to discuss the withdrawals and also to grant a six months extension to make selections. The Tanana Chiefs were eventually granted a one month extension, moving the deadline to March 18.

At a later meeting, with Leosch, the BIA, and other staff members, the Tanana Chiefs requested that additional lands be withdrawn around villages not mentioned in the Act and around certain historical sites.

The delegates were informed of the hiring of Richard Frank as Director of Land Planning and of Robert Jenks as Land Consultant. Both men were commended for the work under adverse time pressures.

When the work was completed, the full Board of the Tanana Chiefs hand carried their selections to Secretary of the Interior Morton’s office in Washington, D.C. On the following day, meeting with the Secretary, they presented their views on the disputed Rampart Dam area.

There was much discussion during the Conference on the subject of the Rampart Dam area classification. At the present time, it remains a legal problem to be litigated.

However, the Tanana Chiefs hope for a decision from the Department of the Interior as to whether they will be allowed to file on this area, making an alternate selection in the event that Rampart Dam area is eventually not available.

There has been some criticism of the lands selected by the Tanana Chiefs. Richard Frank explained that the people making the decisions tried to keep in mind the best interest as projected into the future rather than the immediate present.

Consideration was given to fish and wildlife resources, timber resources, and mineral resources.

It was announced that the Tanana Chiefs had retained a Washington, D.C. attorney, Mr. Art Lazarus to represent their interests in Washington. Copies of the contract with Mr. Lazarus were distributed to each delegate.

Delegates were cautioned about responding to letters mailed to the villages from FNA, BIA, and other consulting firms, either giving information or soliciting contracts. Information has been confusing or even inadvertently in error.

Before responding to mail, villages were advised to check with the Tanana Chiefs office in Fairbanks. This was not to be interpreted as a paternalistic gesture, but to enable the Tanana Chiefs to act in full cooperation with one another and to avoid duplication of efforts.

It was pointed out “that if each village signed an individual contract, and we’re talking about some 200 villages, at $1,000 each, then one firm would be making $200,000 for doing what could be done in one effort.”

Barry Jackson, attorney for the Tanana Chiefs, explained that under the terms of the Land Claims Act, no persons can commit the funds of either the regional corporations or the village corporations.

“Therefore, if you individually sign a contract, you cannot consider that the funds to pay these will come out of corporation funds.”

They will be free to decide if they want to honor these contracts but they will not be legally obligated to do so.

An enrollment contract with the BIA was negotiated by Sam Kito and Tim Wallis. The Tanana Chiefs were the first to do so, setting a precedent for other regions.

An important aspect of the contract was the granting of funds for advertising purposes, to make people aware that the roll was being taken. John Hope of the BIA discussed some of the procedures of the enrollment and explained the timetables.

There will be a total of sixity-nine enumerators for the villages assisted by fifty-three coordinators. A training program for both the enumerators and the coordinators has been initiated. It is the intent of the BIA to have all Natives in Alaska enrolled by August 1972.

Through the Health and Social Service Training Program, there will be persons traveling to the villages to explain both enrollment and the Land Act.

Schedules have been completed and sent out to the villages, along with maps marking the withdrawals prepared by the Land Department of the Tanana Chiefs. These will be made available for study.

On the second day of the Conference, John Sackett was elected new President of the Tanana Chiefs. Originally from the village of Huslia, John is now living in Anchorage, where he will graduate from the University of Alaska in Business Administration this coming May.

In May, Mr. Sackett will move to Fairbanks to devote his full time to his new job.

Elected Vice-President was Tim Wallis. Lucy Carlo was voted in as Secretary and Melvin Charlie as Treasurer. This year’s Executive Board will seat James Huntington of Galena, Ronnie Sam of Alatna, Jonathon Solomon of Fort Yukon, Ernest Holmberg of McGrath, and Pat Frank of Holy Cross.

The last day of the Conference saw the important election of the Five Incorporators who will write the Articles and Bylaws of the Regional Corporation and sign it into a legal entity.

The delegates also had the role of assigning how much power they would choose to give these Incorporators.

In the end result, the final power remained vested in the full Board of the Tanana Chiefs to whom the incorporators would report back.

The body assembled chose Tim Wallis, Jules Wright, John Sackett, Sam Kito, and Roger Huntington as the Five Incorporators. Roger Huntington then made a motion that this group work out the articles and bylaws but that the actual signing be done by old chiefs as a historical gesture.

There seemed to be some doubts as to the legal questions involved and after much discussion, John Sackett, age twenty-seven, commented, “By the time we get done with this, I’ll be an old chief!”

The desire to honor the old chiefs was a commendable gesture, yet this was overwhelmingly a young man’s conference. It was suggested by an onlooker that the old chiefs may be reluctant to sign their peoples into modern corporations.

The Tanana Chiefs Conference where the delegates are warmly and personally recognized and called by their given name seems a far more human community than the typical American corporate structure.

The body present voted to retain the older organization known as the Tanana Chiefs rather than merge it into the new Regional Corporation. The two corporations, one non-profit and one very much a profit-making enterprise, will not be co-identical but will undoubtedly be mutually supportive.

Tim Wallis made a moving speech urging the delegates to back the men they have elected to leadership positions.

“It is time,” he said, “for more political involvement with our people. In the Tanana Chiefs’ area we have the opportunity to elect two representatives and one senator. We are going to have to start getting politically involved. We have to start supporting our people.”